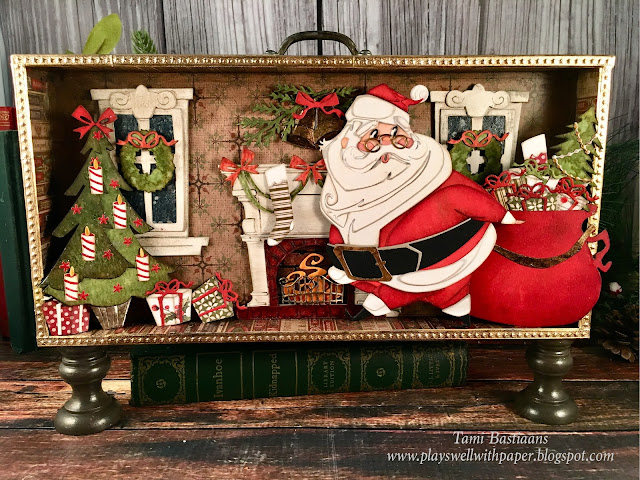 Sometimes a die deserves a whole scene and I felt that was the case with Jolly St Nick.  This new type of detailed die cut, Colorize, was dreamed up by Tim Holtz and was a showstopper as part of his Chapter 3 release this month. It's such a fantastic concept and I adore the result!

Although this may look like a difficult scene to create, it really is just a matter of enjoying the time cutting, coloring and assembling this piece. There really isn't any technique involved save the assembly of St Nick. With that in mind, I have really just posted a lot of close ups and will add a tidbit here and there that might help in the assembly.
Starting with the basics, it is a large Vignette Tray, two large finial bases, and a pull from Mini Hardware Pulls. I covered the inside of the box with paper one of Tim Holtz's paper stashes. 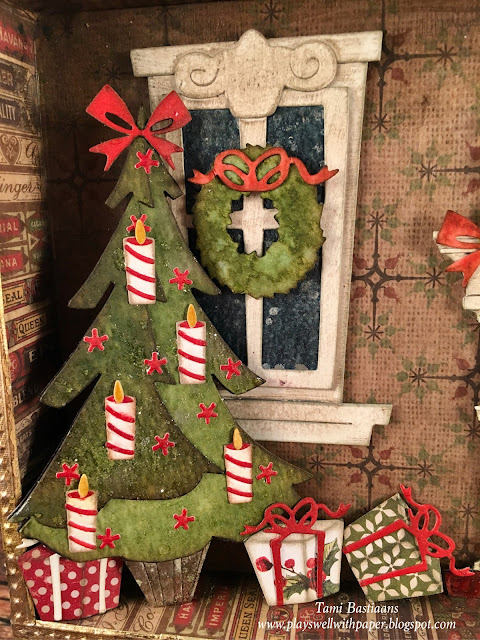 The tree is one of the Layered Pines. I cut it from chipboard and Distress Water Color Paper. I colored the watercolor paper with Peeled Paint and Forest Moss Distress Ink. Then sprayed it with Distress Resist Spray and dusted it with Distress Rock Candy Glitter. Then decorated it with some of the candles, stars and bows from the Festive Things die set. 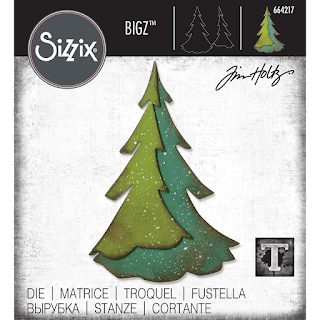 This is a Steel Rule Bigz die so it can be cut from all kinds of things. That's why I cut it out of chipboard as well to give it some thickness so it could stand away from the wall. You can see it has a base that was part of the Festive Things set. It is cut from silver metallic Kraftstock and aged with Mushroom alcohol ink. 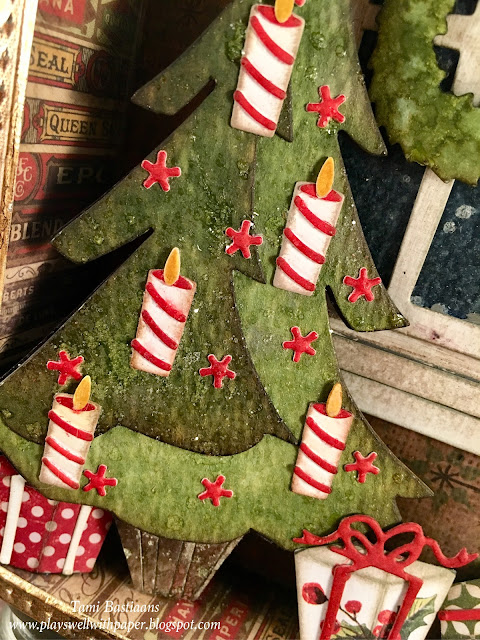 This Festive Things set was one I used quite a bit in this scene. I used a majority of the dies in the set. I used Distress Watercolor Cardstock, a little bit of the silver and gold metallic paper, and some papers from various past Ideaology Christmas paper pads. I found it easiest with those to back them with Sizzix Permanent Adhesive sheets and then when I cut them they were easier to assemble. 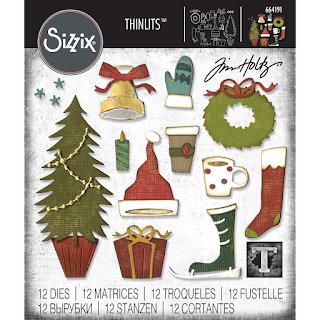 Behind the tree is the new Window Frame. It's a fun, quirky window. In this scene I used Watercolor Cardstock so that it would look like a painted window frame. The night sky was made with black cardstock with Picket Fence Distress Spray to make the stars. Then a thick coat of Distress Resist Spray to mimic the window glass. the wreath is again from the Festive Things set and it is popped up off the window with foam dots. 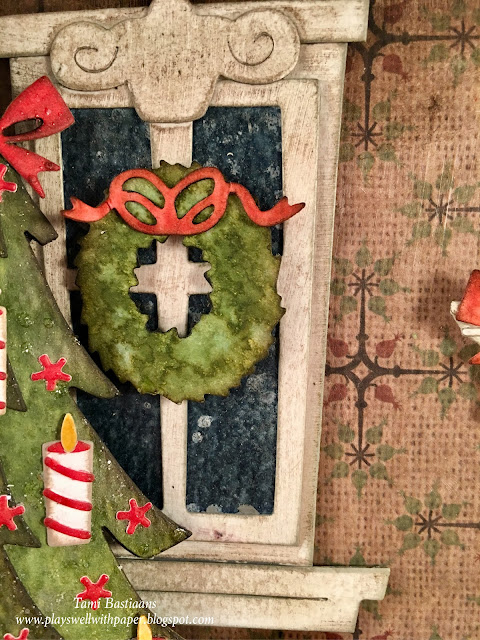 The Window Frame die is a Bigz Steel Rule die so it can again, be cut out of thick materials for dimension. 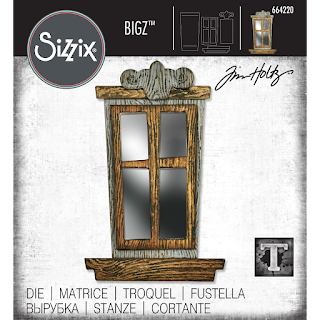 The decor over the mantle was made with a few pieces of spruce cut from the Large Funky Festive set. I added two bells cut from metallic kraftstock and a bow. The bells were added with foam dots. 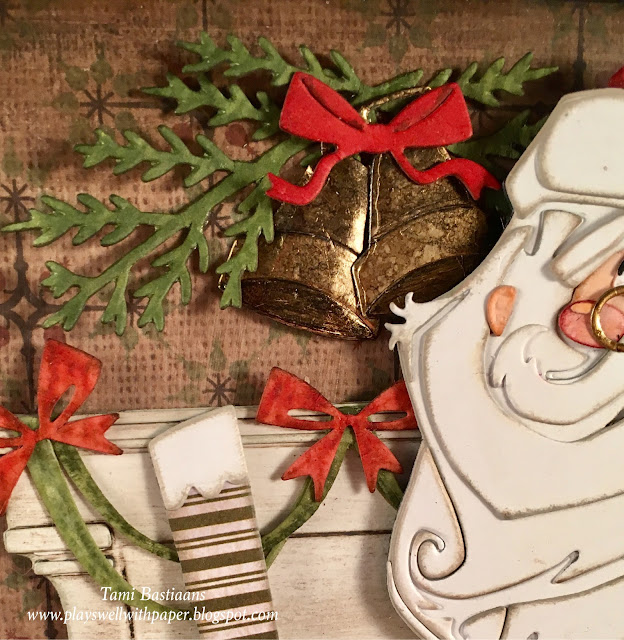 The Large Funky Festive set has some really nice sized florals that can be used for any season depending on how you color them. I used this set on several of my Halloween projects as well. 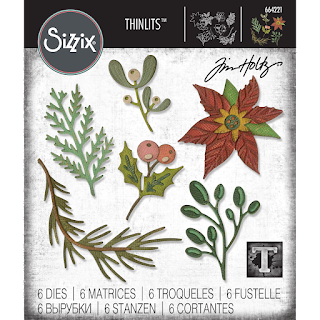 The Fireside mantle was also made from Distress Watercolor Cardstock to look painted. The bows and swags are part of the die set and it also comes with two small stockings.  The stocking I put on the mantle is the one from the Festive Things set however. 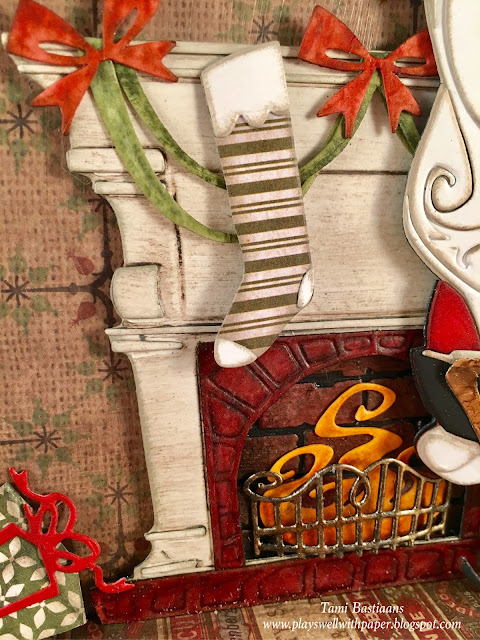 Below you can see all of the many detailed parts of the Fireside die set. This is also one of the Colorize dies, so it helps aid you through the cutting and assembly. 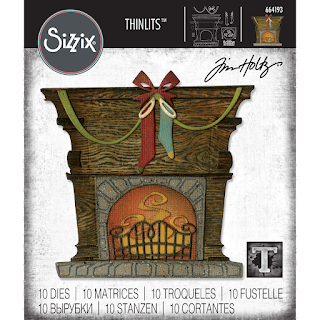 The brick surround is part of the die set. I colored the paper with Fired Brick Distress Ink and then Inked the raised portions of the die with Black Soot Archival Ink before I cut it so it would add the detail in the depressions. The bricks in the back behind the flames are from the Mixed Media 3 set and adhered over some black cardstock. The grate is part of the Fireside set and was cut from metallic Kraftstock. 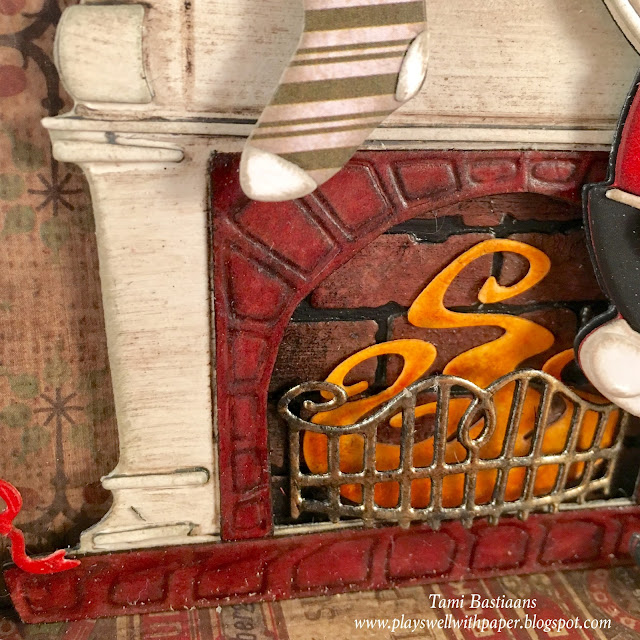 Now to the main attractions - Jolly St Nick. He may look intimidating at first but I have linked to some videos that will help with the concept of Colorize and with assembly. Just cut it out of cardstock with SIzzix Permanent Adhesive on the back. Trust me, this will make it so much easier to put together in the end! 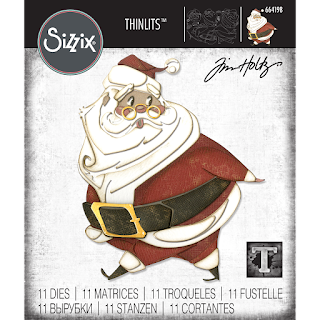 There are several ways you can do this. I cut the white parts all the same white Watercolor Paper and lightly inked the edges. I colored the other papers with Distress Ink before I cut them and inked the edges. 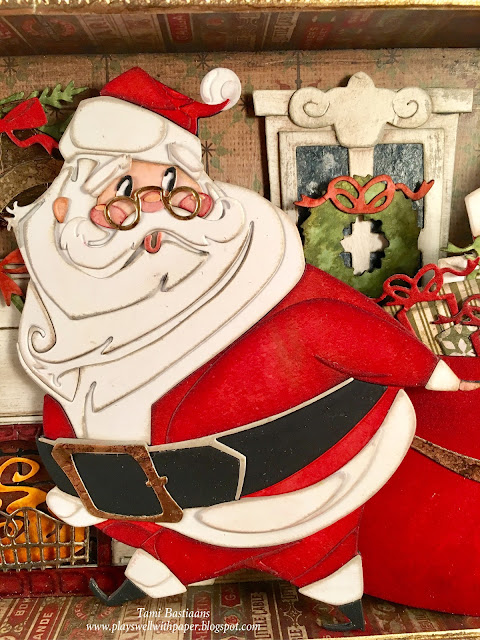 In this video Tim discusses these dies and how he puts them together.

You may be curious as to how I got Santa to stand up. Well what I did was after he was basically assembled, I added some scrap pieces of chipboard on the back to hold it all together and to make it sturdier. Then I attached him to a piece of the packing foam that comes in the Vignette Trays that keeps them separate. I adhered the foam piece to the back wall and then to the back of Santa so there was a lot of dimension to this piece. 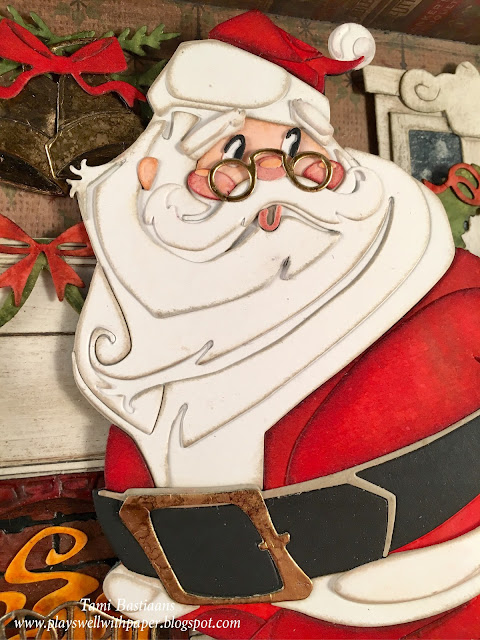 I always figure that the more I know about something the better, so this is a colorize assembly video by Pete Hughes. I've just recently found out about him. He is delightful and has an interesting technique for this die.
I hope having all three of those videos helped. It's nice to see so many different perspectives. 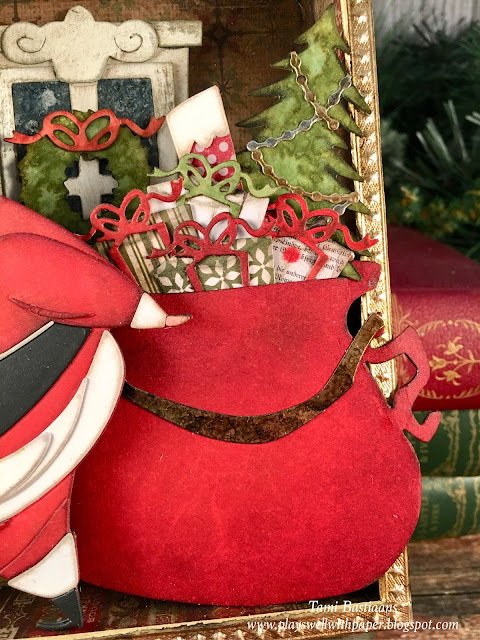 Now on to the goodies that Santa brings. He has to have something to hold them in, and the moment I saw the Halloween Cauldron die, I couldn't help but see a Santa Sack. I stuffed it full of gifts, stockings, and a tree from the Festive Things set.
It needs to be attached to the base or back wall with a piece of the packing foam and also attached to the side of the tray first, then attach Santa last because he overlaps the side of the cauldron and can be attached to it for stability. 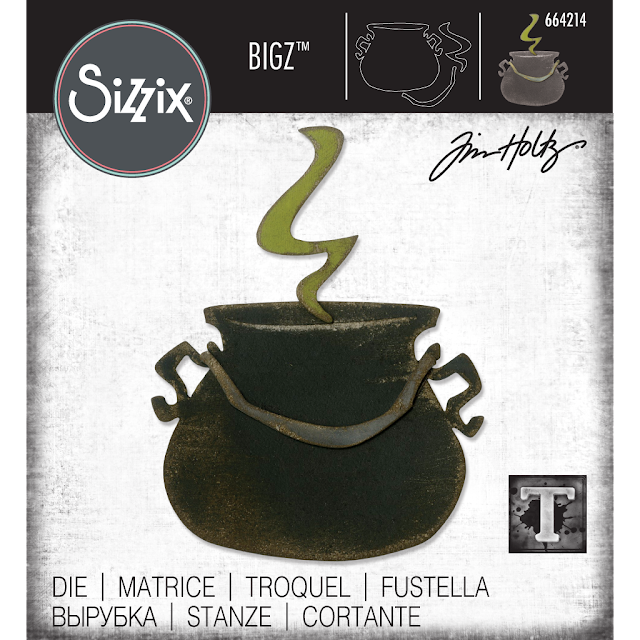 The Cauldron die is a Bigz steel rule die, so I cut it from Watercolor Paper and chipboard. The handle was only cut from gold metallic kraftstock. 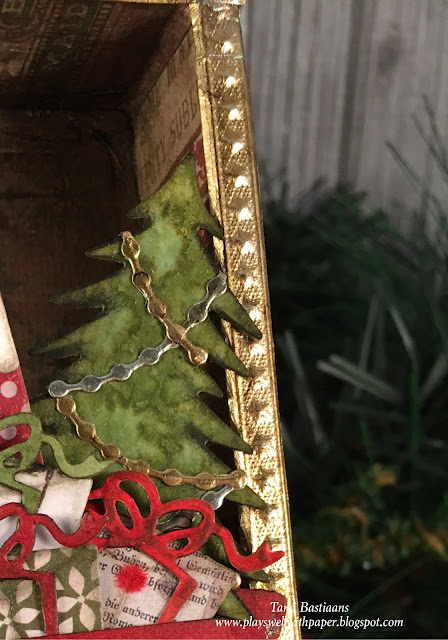 Often when working with the Vignette Trays, we use tape to cover the raw edge, but I wanted something a little more fancy, so I made multiple of the small 3-D Star Trim cuts. The I attached them all around the outside of the tray with some Collage Medium. It fits perfectly on the thick edges. I used gold Metallic Kraftstock. 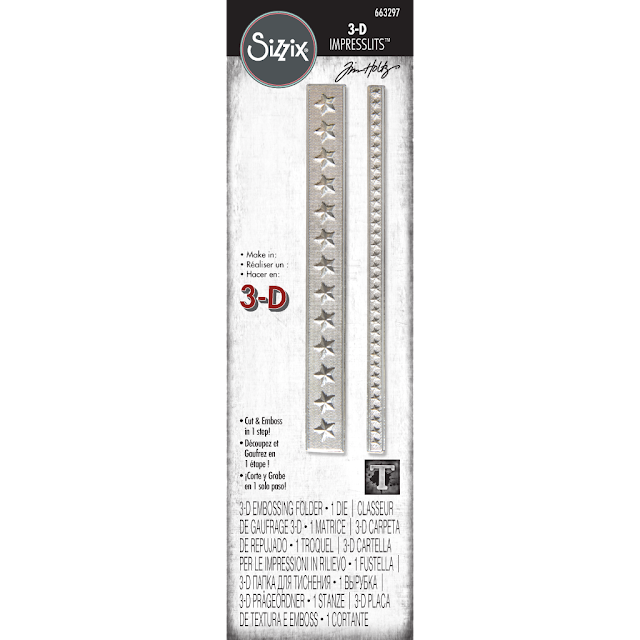 Because this is a 3-D Impresslit die, that embosses and cuts, you have to lightly spray the paper with water, and then run it through the machine three times. Also only use ONE cutting plate. 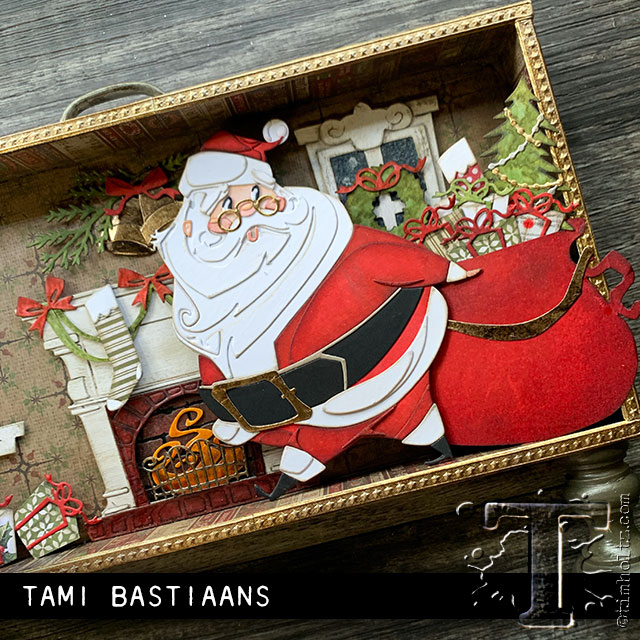 There you have it. The basics of this Santa's Delivery scene. It was so much fun to put together and I hope you are inspired to make a scene of your own!
Tami
I am an affiliate with Simon Says Stamp and Scrapbook.com so the links below send you to one of those stores depending on which logo you choose.  If you wish to purchase something from either store and use one of my links below, I get a small percentage of your order, at no additional cost to you. This helps me to defray the costs of this blog and the ideas and tutorials I post here, and your help is greatly appreciated! Thank you!

I simply LOVE this vignette! Perfect timing, I have time this weekend to play and Jolly St. Nick just jumped to the top of the list of things to work on...I think I have everything I need...well, enough to get started...LOL. LOVE SANTA!!!

This is the most carefully constructed and created little scene I've laid eyes on! So much attention to detail!

Wow Tami, this is one of my favourite creations with the Chapter 3 dies!!! I love every detail!!! xx

Wow! You have outdone yourself AGAIN!!! I just love this so much and every little detail is perfect even up close. The santa blows me away but the bells are gorgeous and that cauldron for the bag?! how do you come up with these things!!!

Tami this is amazing! The attention to detail is incredible. You are so talented. I can't wait to buy all of the stuff to make this. Thank You so much for sharing!!!

Nicely done. Thank you for sharing and inspiring others.

Hey Tami, I have a question, please. Did you cover the outside of the vignette tray with paper? or paint???? I cannot decide what I would like to do, so some kind of direction would be appreciated...I have my St. Nick, the Tree, Fireplace, Windows and Santa Bag ready and I am working on the packages...then onto the Vignette Tray...getting there...so many little pieces, need new glasses and smaller fingers...LOL.