Pooh Bear and Eeyore Save the Day! 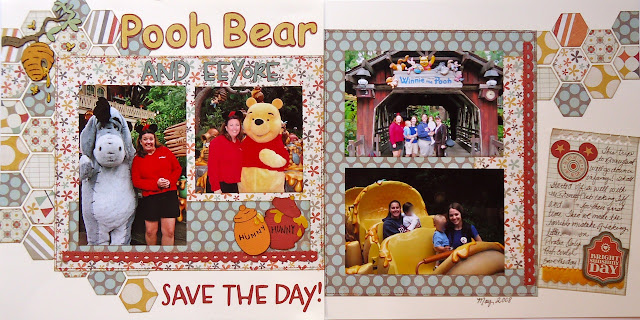 I have scrapped some photos from this Disney memory before, but I added some new ones on this layout.     What happened is that I had a Disney Scrapbook club at my LSS, and so some of us decided to take a trip to Disneyland together.  Two of the girls had little ones.  One of them, H had been taking her daughter since she was born, but it was the first time for T and her son.   The day started off just great with the Tiki Room and the Jungle Cruise.  Then, we went on Pirates, not having any idea that it would completely and utterly terrify poor T's son.  We quickly tried to regroup and headed to Critter Country for a little time with Pooh and Eeyore, which greatly helped the situation.  Unfortunately we had done a number on the kid as far as dark rides go for quite some time.  I'm happy to say that he did grow out of it eventually and came to enjoy Disneyland immensely before they had to move out of state.  So at least we didn't scar him for life. 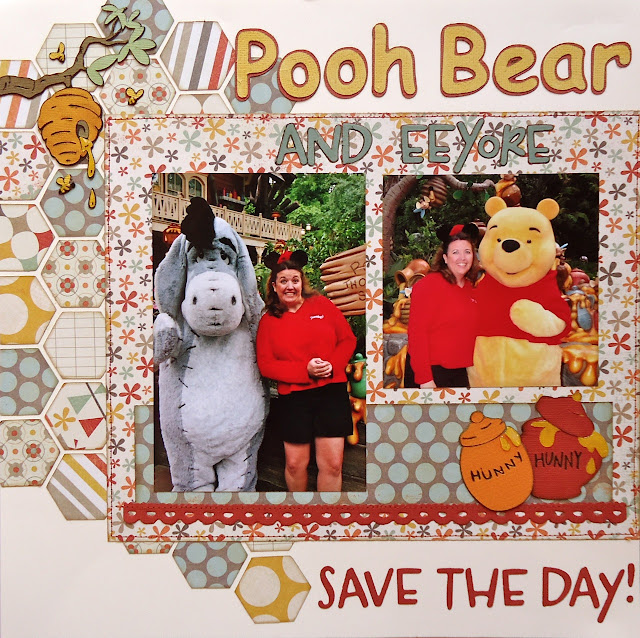 Ta daaaaaaaaaaaa!  I actually got out my Cricut CARTIDGES and cut some things out!!  I can't tell you the last time I actually used a cartridge. And if the truth be told, it actually wasn't all that bad once I figured out how to get it to cut all the parts again.  There was a slight re-learning curve and I ruined several pieces of cardstock, but I was victorious in the end!! 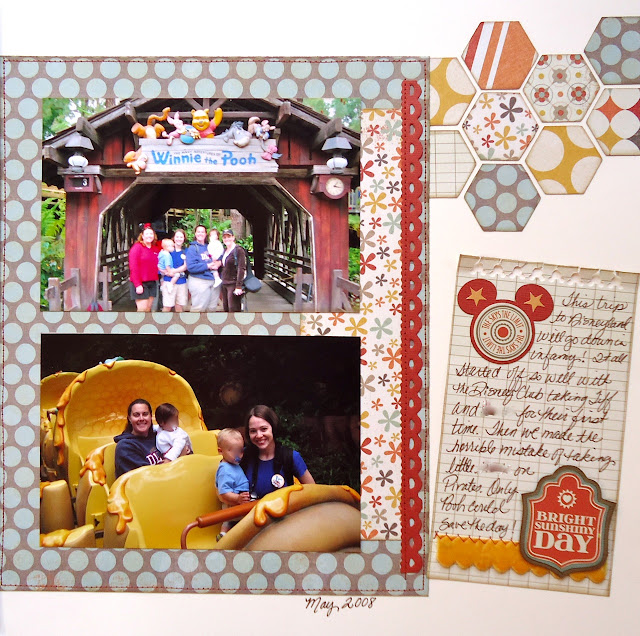 I kept this side fairly simple, but had fun using the stickers and my Mickey punches for the journaling block.

If you haven't gotten to ride the Many Adventures of Winnie the Pooh ride at Disneyland, take a virtual ride here:
Posted by Tamera at 6:59 PM 2 comments:

The View from Pooh Corner 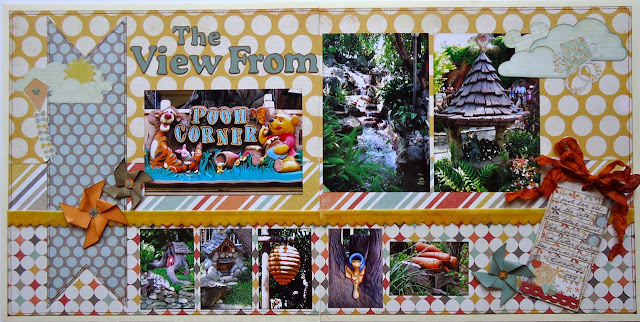 If you have ever spent much time in Critter Country in the far back corner of Disneyland, you know how many really cute details they have added since they took out our beloved Country Bears and put in the Pooh ride.  Don't get me wrong, I love the Pooh ride, but not as a replacement for the bears.  I wish they could have worked something out so that we could have had both. Regardless, the little details are again what make trips to Disney so delightful. 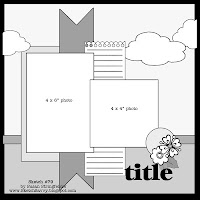 I got some of Pink Paislee's Prairie Hill paper and since it had clouds, I was inspired to use this sketch #79  from Sketch Savvy. 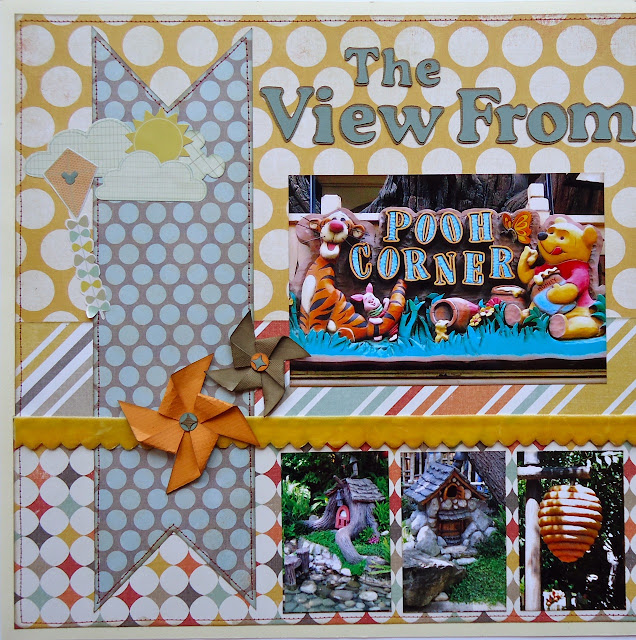 I kind of followed the sketch, but made it fit the papers and things that I had.  I felt like the kites and clouds were just perfect for these pictures. 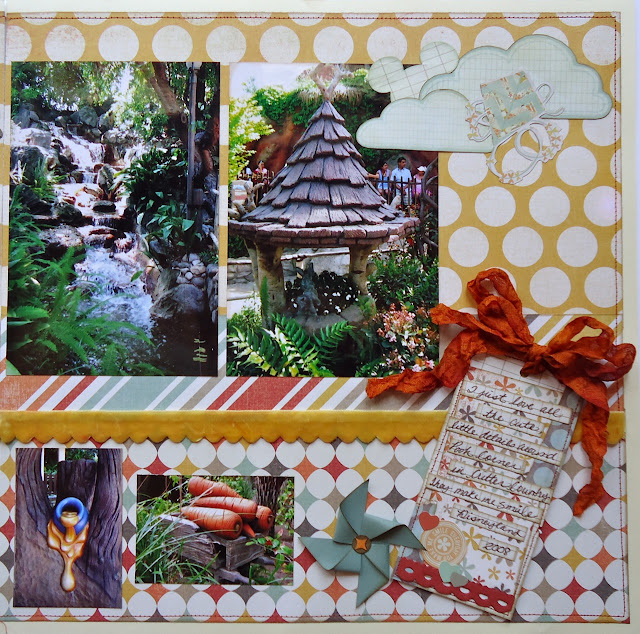 And I couldn't help throwing in a few Hidden Mickey clouds too!

This was a fun, simple layout and I enjoyed using some paper that I wasn't particularly sure about at first.

Email ThisBlogThis!Share to TwitterShare to FacebookShare to Pinterest
Labels: Based on a Sketch Savvy Sketch, Disney Layouts, Pink Paislee

On our last trip to Disneyland a few weeks ago, the ducks were out in force!  And there were a lot of ducklings running around too.  They are so funny the way they really aren't bothered by all the people.  Sometimes they are so blatantly careless that the mamas take the ducklings out into the central hub to go popcorn hunting and are in danger of either being trampled by people and horses, or run over by one of the vehicles, so the Disneyland Security assigns a duck patrol to follow the around with umbrellas and make them get out of the way when danger is near. 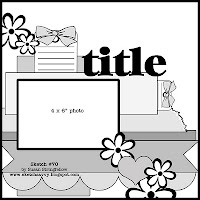 I stretched this one-page sketch into a two-pager for all my duck pictures.
This is from Sketch #70 from Sketch Savvy. 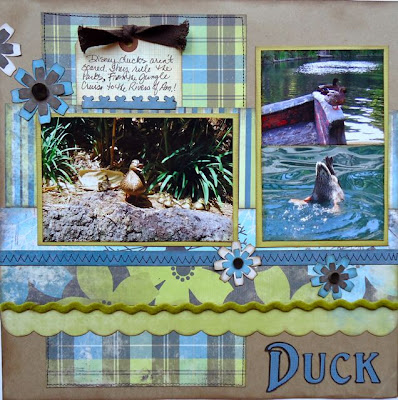 I love the mama duck in the main photo on this page.  She had her little brood up on the banks of the Jungle Cruise and she had some things to say to us as we passed.  I caught her in mid quack.  And the ducks just sit wherever they want.  The top photo on the side is from the Pirates Lair on Tom Sawyer's Island where they are sitting on the sunken ship, and the duck butt is was taken from the deck of the Mark Twain near New Orleans Square. 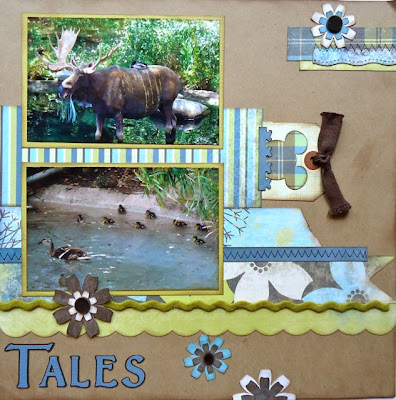 This side has one of the ducks sleeping on the back of a moose along the Rivers of America, and from the poo running down the moose, you can tell that he sleeps there a lot.  The bottom picture is of a momma duck and her brood swimming in the upper pool in Pixie Hollow. 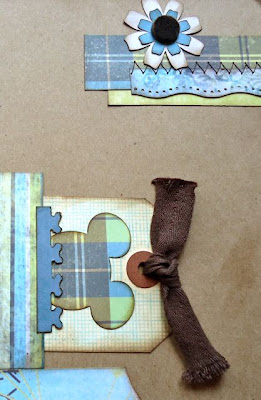 The papers I used on this layout were from Scrap Within Reach, and I made my own flower jpg. to use as a cutting file so they matched the flowers in the paper. You are welcome to download it for your own personal use. 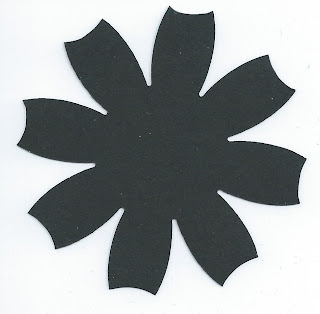 Email ThisBlogThis!Share to TwitterShare to FacebookShare to Pinterest
Labels: Based on a Sketch Savvy Sketch, Disney Layouts, Scrap Within Reach, template

Treehouse with a View

This layout is for Disney Scrappers Special Diamond Jubilee Challenge.  We made a challenge to do a British themed Disney layout.  We really don't have much at Disneyland that we can draw from, so I decided to use the view from Tarzan's Treehouse with the Union Jack flying and to use a Merchant-Ivory film title as an inspiration.

All of these pictures were taken from the top level of the treehouse.  It really is a spectacular view of Disneyland!  Next time you're there, stop for a moment and take a few pictures. 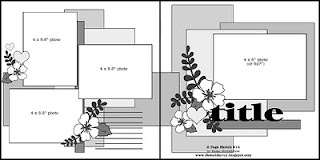 For this layout, I used Sketch #14 from Sketch Savvy. 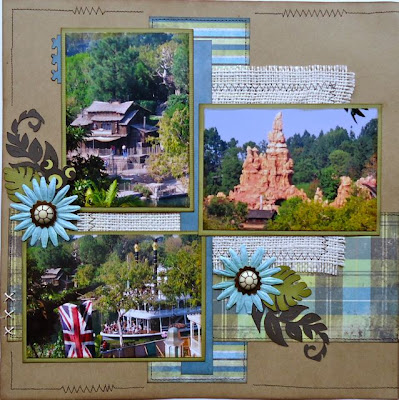 I ended up doing a lot of sewing on these pages.  I wasn't planning that at first, but I like it and I had fun!  The greenery is also from Sketch Savvy and the flowers are Prima.  The buttons I got from a yard sale. 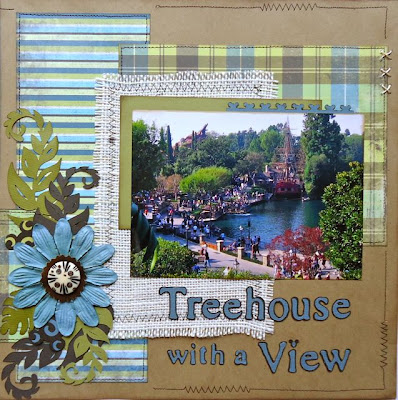 I added a few Hidden Mickey's and some hand sewing on each page as well with twine.  The challenge actually had and additional challenge which was to add a rhinestone to represent the diamond jubilee, but that just didn't fit with the rustic feel of this layout.

The paper I used is from Scrap Within Reach.  I don't believe they are still in business unfortunately. 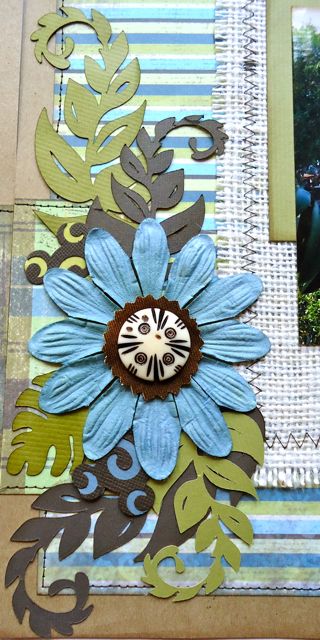