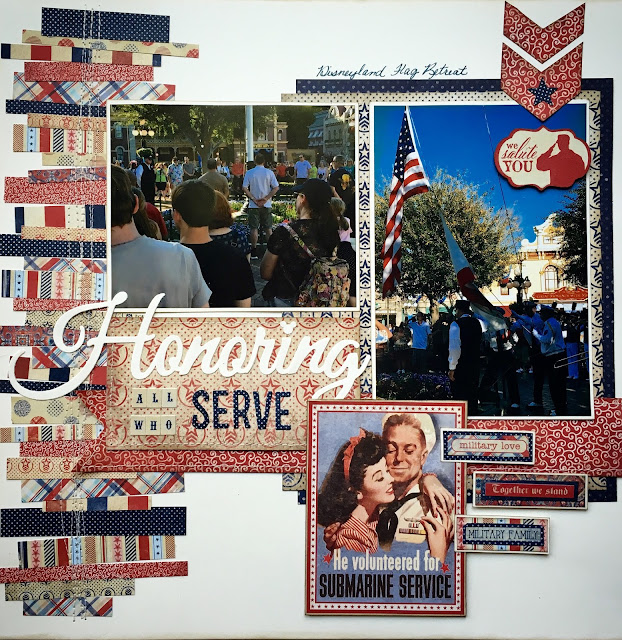 This was a sample layout for a Disney Scrapper's July Red White and Blue Challenge.
For this challenge, we were to use the following Pinterest inspiration board to get some ideas for scrapping a Disney photo. 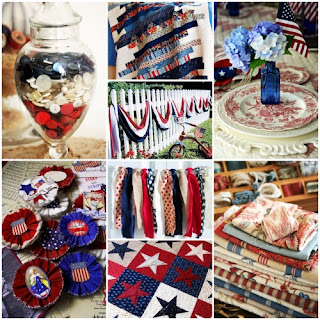 Using the inspiration, scrap a photo for Canada, France, UK, USA, the Fab 5 in their Disneyland 60th or just something with red and white and blue. Or we could leave out the blue since is usually sky in the photos even of Canada, a light sky blue could be included.
One additional part of the challenge was to include stripes. Striped paper, ribbon, embellishments, whatever, just something striped. 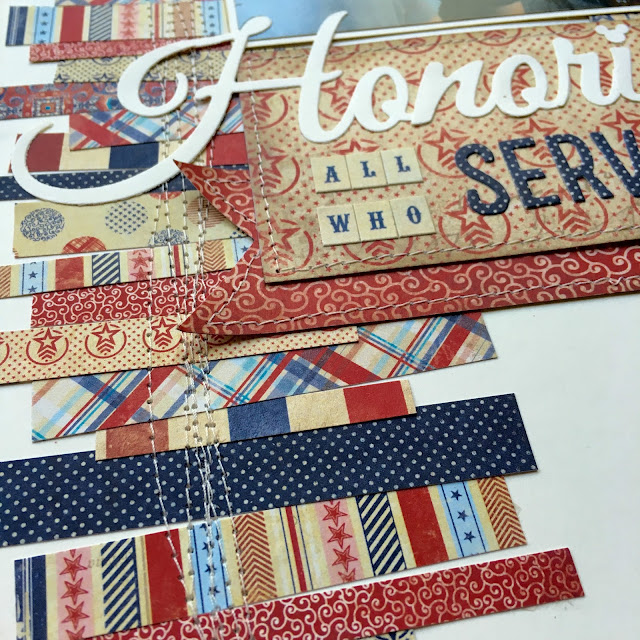 For my layout I cut strips of paper (some of it striped) to form paper stripes to make a border my layout. Then I sewed across them to add texture. I got this idea from the quilt in the inspiration collage above. The rest of the layout is based on Sketch Savvy #152 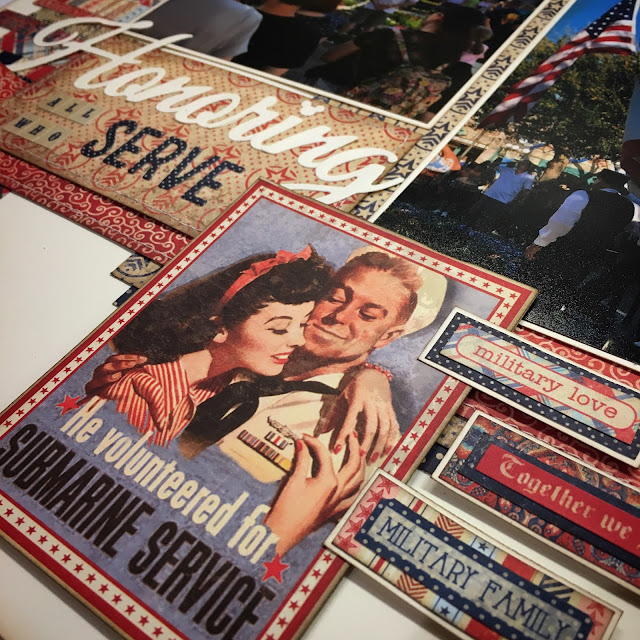 On this particular day, I had gone to Disneyland to meet up with some college friends I hadn't seen in 20+ years.  My friend Paul is a commander in the US Navy and serves on submarines, so I included the submarine and military word stickers. His amazing wife, Courtney, holds down the fort at home while he is is at sea sometimes for six months at a time. They have five terrific kids and in these pictures he is in the white shirt standing at attention around the Disneyland flag pole and the rest of the family is behind him, supporting him, as they always do. I carefully picked the elements from the Authentique Freedom line that helped me tell the story of their family and this special Flag Retreat Ceremony. 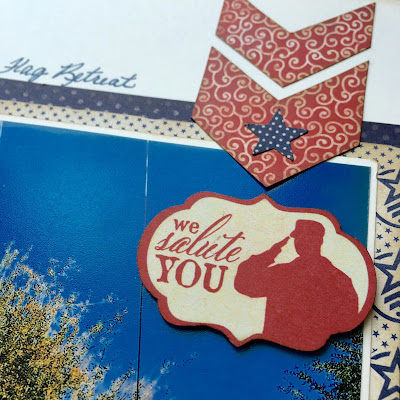 Thank you for your service CDR Paul, and thank you Courtney and kids for the sacrifices you make that allow him to serve.  We salute all of you.
Posted by Tamera at 5:38 PM 11 comments:

Another Sample layout for the Disney Scrappers NSD challenge week back in May.  I just realized I never posted them here.  I have a backlog of things to post.

Here is the challenge:
Much like the Disneyland Challenge, this challenge is simply to scrap anything within the 15 year old Disney California Adventure Park.
Seeing as this is a park about California, your layout must include at least two of the following:
**Extra Points if you scrap something from the original DCA park** 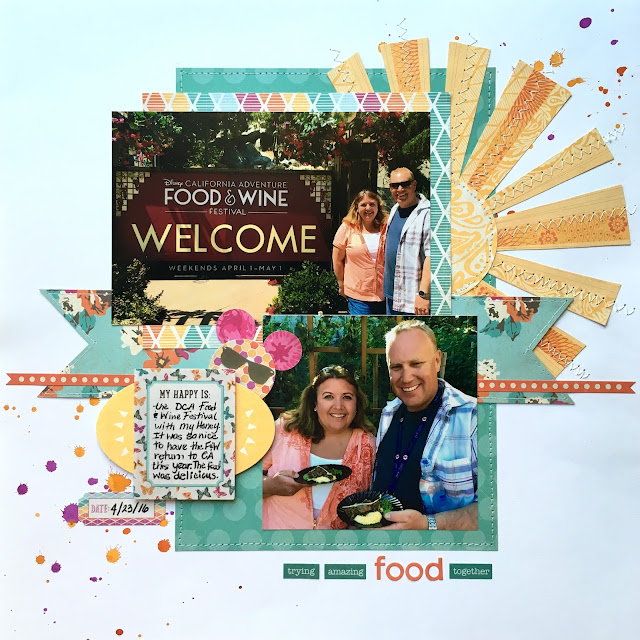 We just went to the DCA Food and Wine Festival!

Due to construction it has been absent from the park for the last 5 years.  I'm so very happy they brought it back.  Unlike the Epcot F&W Festival, the booths are themed to the different areas or influences on California Cuisine, all with a modern twist.  The food was incredibly good and I have a lot to scrap from just the one day.

This is just kind of an intro page to my F&W pages. I included the sun and sunglasses from the challenge. The paper is Authentique Radiant. 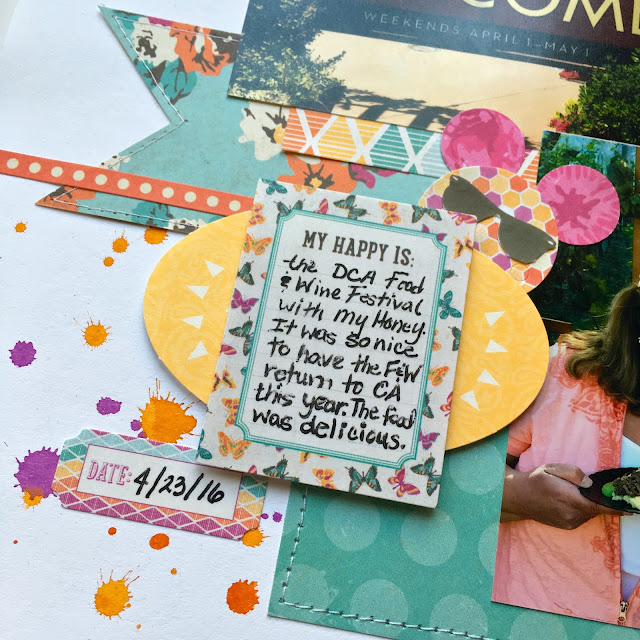 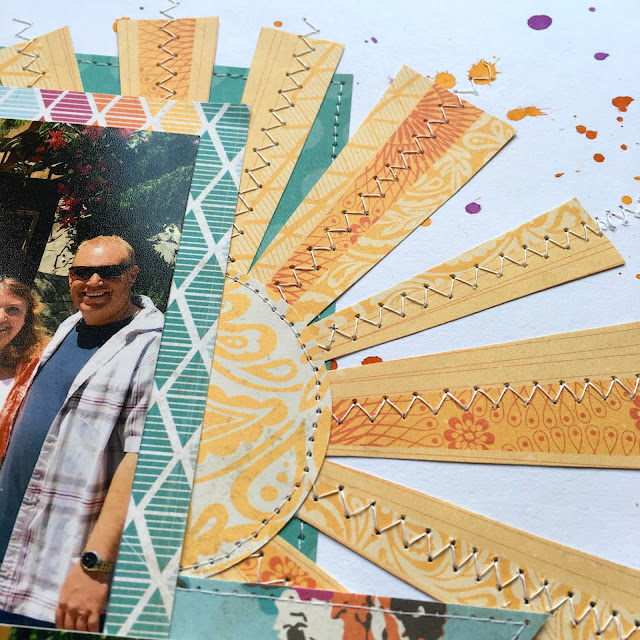 For National Scrapbook day in May, Disney Scrappers hosted our annual week of Disney scrapping with challenges.  These were two of my challenge layouts.


“Never say goodbye because goodbye means going away and going away means forgetting.”
--Peter Pan
This challenge may cause you to shed a tear or two.  The challenge includes two elements:
With all the changes happening in so many parks, I'm sure we all have pictures of things that are no longer part of the Disney parks.

********************
This layout features paper and embellishments by Basic Grey, and photos from Big Thunder Ranch Jamboree (RIP) which was one of my favorite parts of Disneyland park.  It was such a great get-away! These pictures were from one of the many special character events they hosted back there.
Layout based on Sketch Savvy Sketch #156 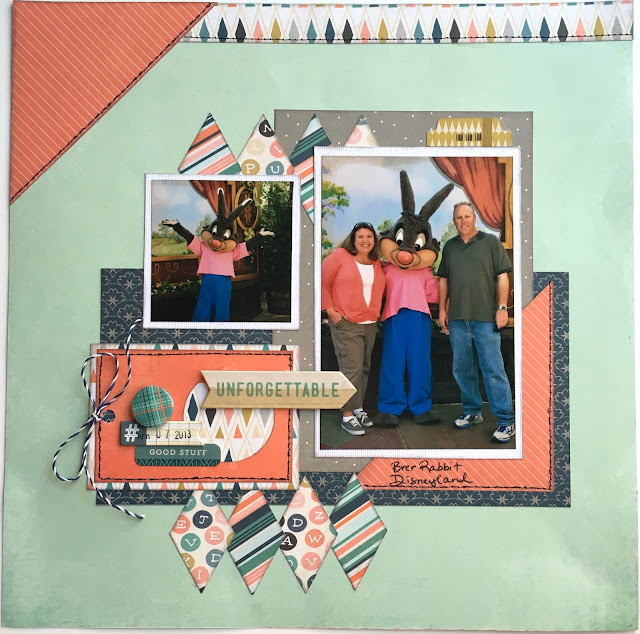 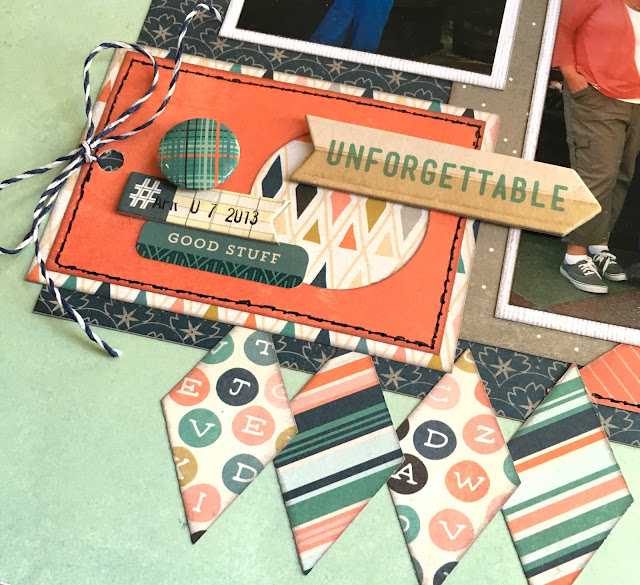 And this is my second layout and challenge:
Almost 61 years ago, Walt Disney opened his beloved Disneyland Park in Anaheim, California.
This challenge is simple, scrap anything in Disneyland Park, however, since we are still celebrating Disneyland's diamond anniversary, you must include at least one of the following on your layout:
**Extra points** if you scrap a Disneyland original attraction or something with historical Disney significance. 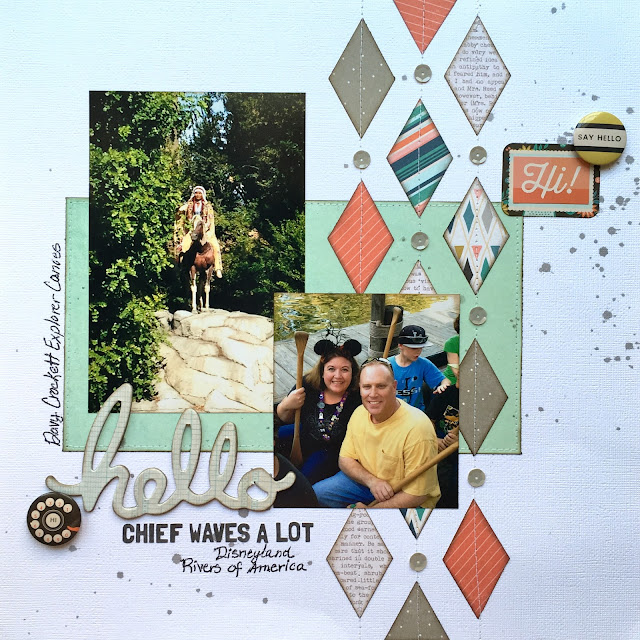 My layout was inspired by one Susan at Creatively Savvy did for Christmas.  I loved her use of the rhombus shape and kind of fiddled around with it a few months ago but didn't get anywhere with it. I pulled it back out for this challenge, and all the Basic Grey embellishment bits that I thought I was going to throw away ended up being perfect for the pictures!

This is a sight you see either from the Mark Twain River Boat, the Sailing Ship Columbia, or the Davey Crockett Explorer Canoes.  We were in the DCE Canoes on the day I took these pictures.  Chief Waves-a-lot has been there in various forms since 1956 I believe.  Since he waves, a LOT, I thought all the hi and hello  embellishments were funny.  The chief was an important part of the original Rivers of America story in that directly across from him is the settler's cabin which has gone through several storylines itself. Now it is home to the River King, Mike Fink. All that to say that the canoes and the chief are both historically part of Disneyland's ROA since 1955-56. 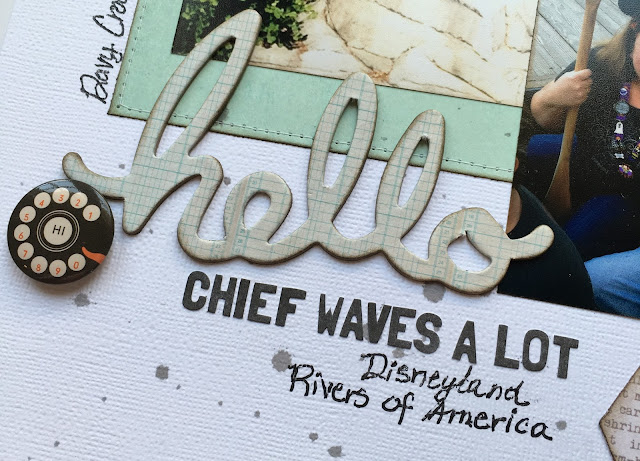 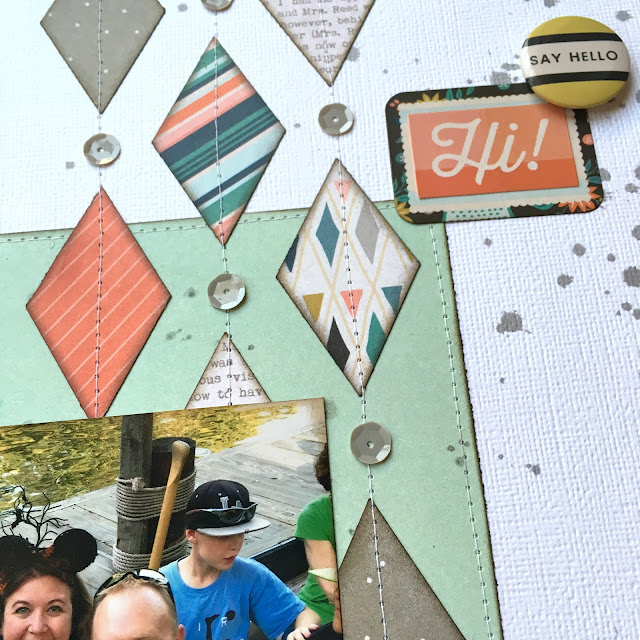 I was inspired by a Valentine shadow box project I saw on Pinterest by Emma Williams and wanted to make some spring shadow box kits but got sidetracked and never got it done. You can see her box here.
Then I decided I wanted to make a patriotic one and have it say "A New Birth of Freedom" using the bird and egg theme.  No matter what I did I could not get the little banner saying "A New Birth of" to look right, so I ended up just nixing that and I like it just as much without it. 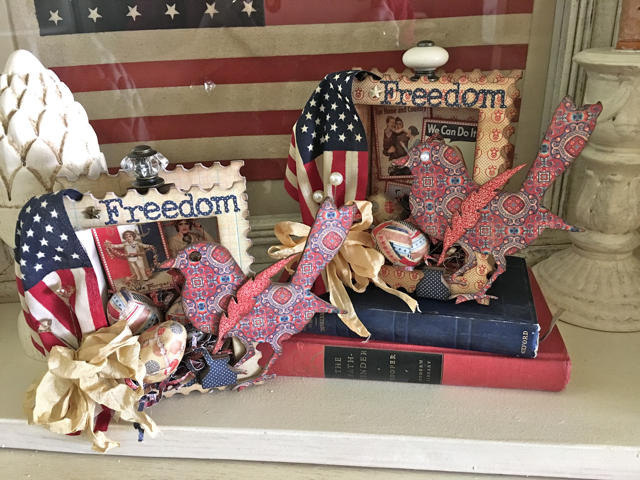 The knobs came in three styles, two were clear and one was cream. So I made two variations of the kits. Pearl and Crystal. 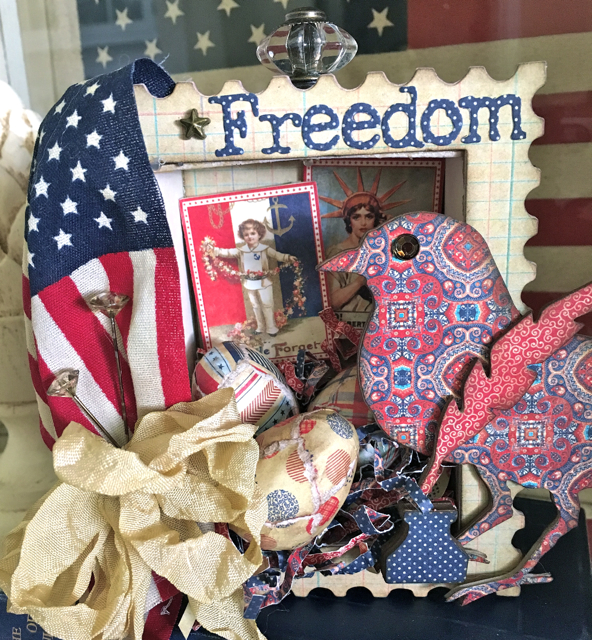 For this project I used lots of Sizzix Alterations dies by Tim Holtz. 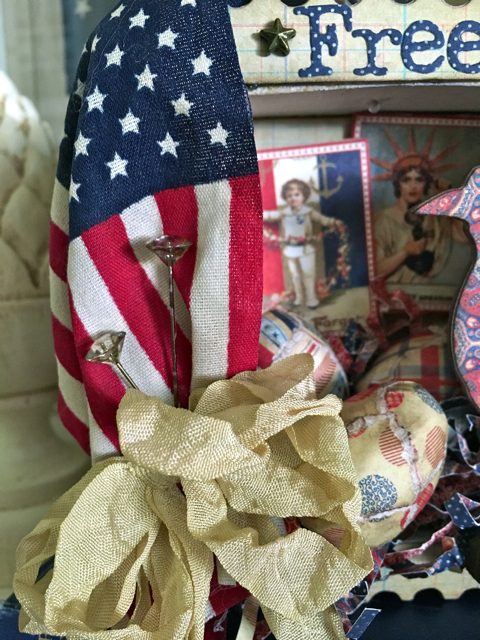 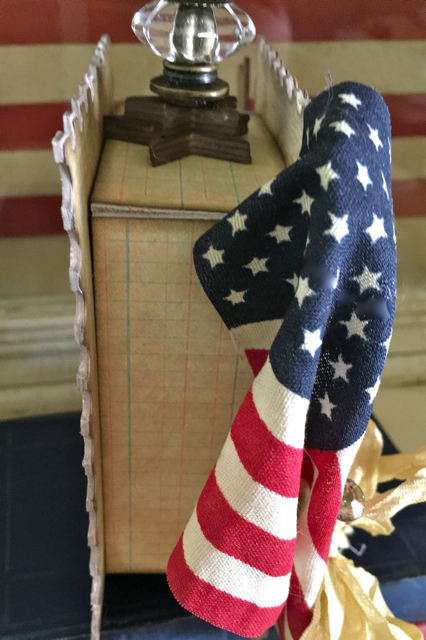 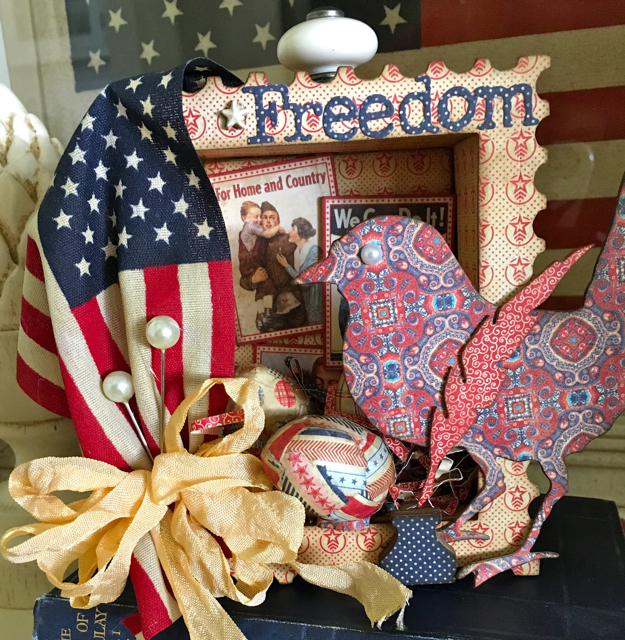 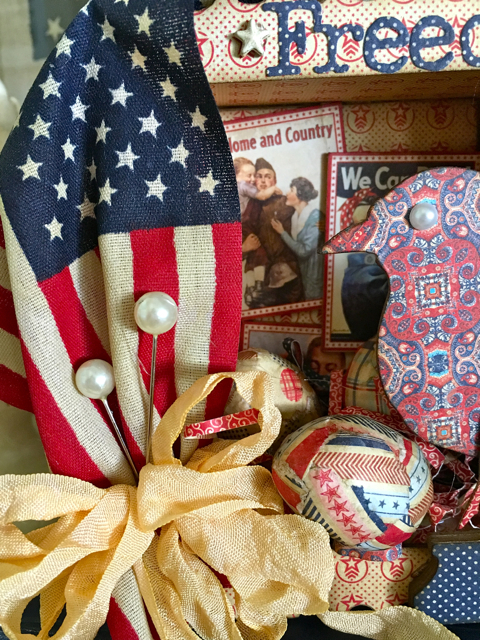 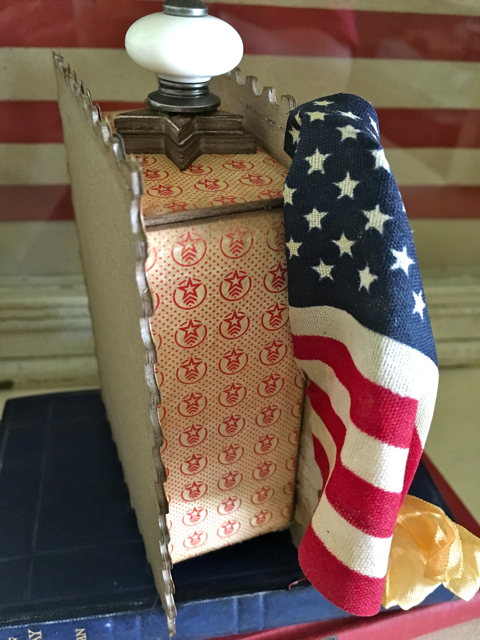 This is a quick video explaining the kit
with some tips about how to put it together.

Don't miss a post! Get email notifications for new posts.